Cooling A Garage With A King High Velocity Fan

THE BEST APPROACH TO KEEPING IT COOL

DOES YOUR GARAGE GET TOO HOT TO WORK?

SOLUTIONS TO COOL THINGS DOWN

If you are stuck with no air-conditioning in your garage or it’s completely enclosed with no windows, this post is for you. As the summer heats up, hot and humid working conditions can put a stop to those all important shop projects. Using a high velocity fan or two can help transfer the hot air out and any cooler air in, makes a big difference and getting you back to work.

Before we talk about the fans, let’s start with the basics…

First things first: if you’re truly attempting to cool your garage—with or without the door open—insulation is key. Most residential garages will have insulated walls, but it’s definitely worth a look, and possibly an insulation upgrade if you’ve got an older home.

The easiest and least expensive way to make your garage more energy efficient is filling the walls with a fluffy layer of fiberglass. All it takes is a utility knife, a straightedge, and a little patience to make sure the insulation completely fills the stud cavity, side to side and top to bottom, without being overly compressed.

Additionally, you may want to think about a garage door screen that would open up your garage to give you access to driveway grilling and that summer breeze.

“Works great and is quiet. Great for the shop!” 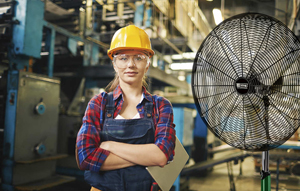 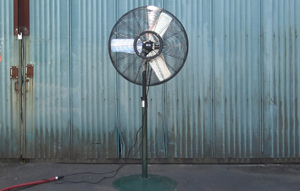 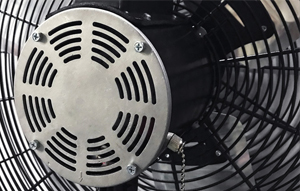 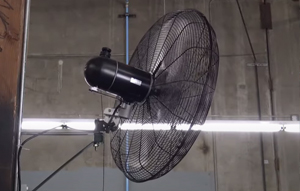 The idea with just about any fan setup is to extract hot air out of the space, simultaneously replacing it with cooler air. With an open overhead door, controlled displacement of air is difficult given the giant gaping hole on one side of the garage.

Placing a single fan at the very back of a garage and aiming the airflow towards the open garage door, as so many of us do, is almost pointless because there’s no cooler air being drawn back in. In fact, you could be making your garage even hotter. If the open overhead door is all you’ve got in terms of ventilation, a better idea would be to use two or more strategically placed adjustable pedestal fans.

The idea is to create a wind tunnel of sorts, where the air is being circulated in a specific pattern, not just moved around wildly. Multiple fans can also be used to increase effective cooling, but balance them out evenly between inward air and hot air output. If you’ve got an odd number of fans, it’s okay to add an extra fan to the cool air inward-blowing side.

Obviously, the results depend on the availability of cooler air, so if it’s 100° outside, you’re gonna be hot regardless but by blowing air around, the fan makes it easier for the air to evaporate sweat from your skin, which is how you eliminate body heat. The more evaporation, the cooler you feel.

If you’ve got a window in your garage, you’ll be in a much better position to cool things off than with the first configuration. The same principles apply here: we want to bring cooler air in, pushing hotter air out.

Don’t automatically assume the biggest opening is where the cooler air should come from. You’ll want to position your cool air inward-blowing fans on the shadiest side of the house and the hot air outward-blowing fans on the sunny side of the house. If the sun is just pounding on the big garage door opening, adjusting the door height may help—especially if it’s insulated on on the inside of the door. This will make the hot air extracting fan have to work a little less.

An ideal situation is to have a window or another overhead door in the rear of the garage so you’re creating what could become—with multiple fans—a pretty powerful garage cooling solution using just fans. Of course, since warm air rises, the higher the heat-extracting fan, the better. Likewise, the lower the cool air intake fan is—generally speaking—the better as well.